Update before the Beach

Tomorrow we head off to the beach in Rhode Island for a week so I figured I should do an update now before we left because my connectivity there is always in question...

I'm amazed at the progress I've made this week since Monday. I didn't think I'd spent that much time on it this week but I'm blown away when I compare the pictures... 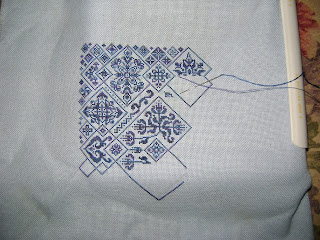 As you can see in the above photo compared to the below photo, I had to do some frogging but I survived that and continued on... 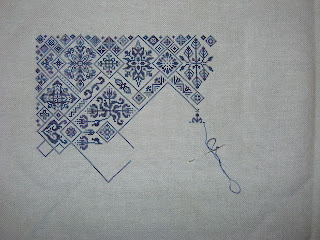 I am almost complete with the second page (I've completed the top half of page two and now working on the bottom of it). This leaves me with one full page and then three 3/4 pages to complete this piece. I may be too positive on how much I'll get done at the beach house but I just cut my fabric to take with me to do the companion to this piece (Cirque de Circles). We'll see how I do on this and possibly start that...

So Much for Sunday Updates...

Didn't even make it through the first consistent Sunday Update...well as the saying goes (I think- well this is how I say it) "so much for the best made plans of mice and men"! but I have a good excuse!!

This past weekend the kids and I accompanied my husband to the Catskill Mountains of New York. He was running in the 33rd running of the Escarpment Trail Run. What is that you ask? It is a trail race along the Escarpment Trail. It is 30K (18.7 miles) long from North Wyndham to North Lake in Tannersville. This is the third time he's run it and he loves it no matter the weather or trail conditions. Last year when he ran it there was a MAJOR thunderstorm that followed the runners along the 5 mountain peaks and made for some very nervous spouses and significant others waiting at the other end of the trail. This year he completed the course in just over 5 1/2 hours...the trail was complete mud this year with all the rain we've been having in this area of the country. Many runners were complaining of their slow speeds this year because of the wet, slippery rocks and mud this year. 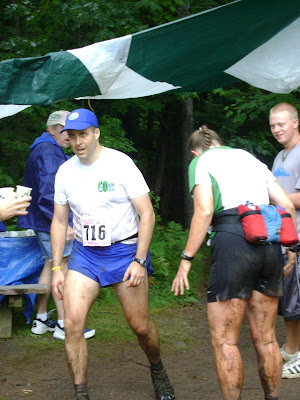 My husband is in the blue hat and how do you like the mud pack on his legs and believe it or not those were NEW SHOES before the race? How about the gal next to him?? They all seemed to have a great time running the race but they were all DEFINITELY muddy by the time they finished.

You would think with him out on the trail for 5+ hours I'd have lots of progress to show on Cirque de Carreaux (CdCa)...but it didn't happen. The kids and I volunteered at the finish area helping to cut up watermelon, mix Gatorade, mix pasta salad, etc and the time just flew by before I could even get the stitching bag out.

I did make some progress in the last week on it though. I was going to post last Wednesday or Thursday. Got the picture taken and uploaded to the computer but never got the post made so the first picture here is the one from last week... 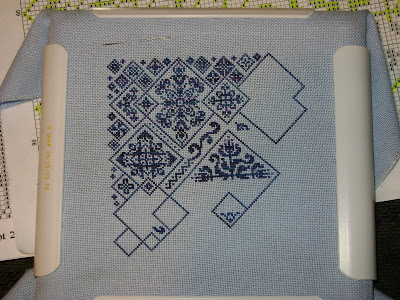 ...and then the second is for this update. 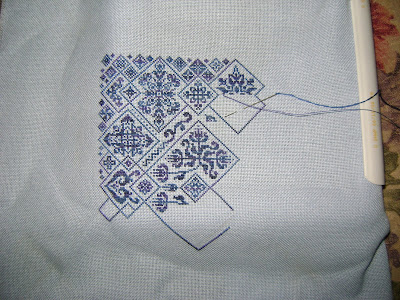 I have "completed" the first page (except for a couple of stitches here and there which are part of another "major" square located on an adjacent page.)

I am going to try to update again later this week and there won't be another update on Sunday seeing as we leave for the Rhode Island shore for vacation on Saturday.

Thank you all for following my progress. Knowing others are enjoying seeing my progress as much as I enjoy making it is very fulfilling...JS
Posted by Jackie in CT at 3:25 PM 1 comment: