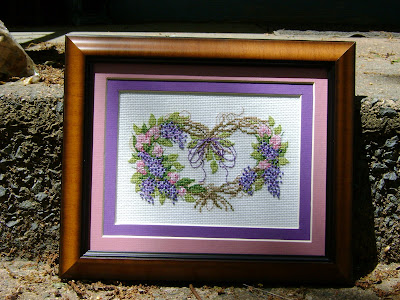 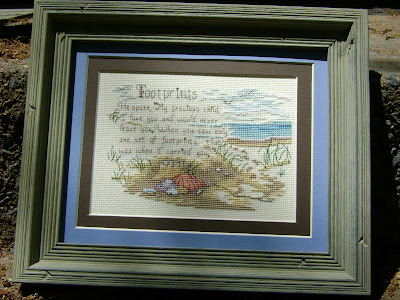 Footprints and Rosebud Wreath are COMPLETE with frames and will be delivered to my son's school this afternoon for next week's auction.

I'm so happy with how both of these came out...I hope they will bring in a good chunk of cash for the school...I'll let you know after next Saturday (5/30) on how well they did...

To everyone in the United States...have a wonderful holiday weekend and please remember to thank a vet for their service and remember those whom we've lost in their service to our country...from a daughter of a vet and sister/sister in law of active duty air guardsman/woman...
Posted by Jackie in CT at 12:39 PM 15 comments:

My trip and stitching

Let me start at the beginning...about three weeks now my boss emailed about 5 of us (crew of 20 or so) asking if we were interested in going on a road trip for some training on a new system he has just purchased. Well with some creative figuring and lots of support of my husband and other family members I was able to go along on this excursion. So on Tuesday at 6:15 in the morning I met the crew in Sturbridge, Massachusetts and we started our trek to Indiana.

I took plenty of stitching projects with me to work on but didn't get much accomplished. 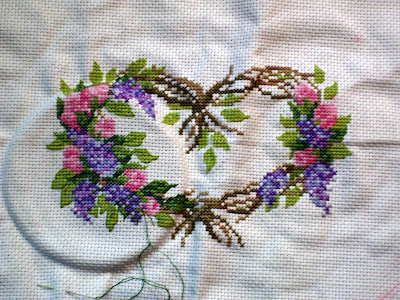 I did finish the cross stitching of the rosebud wreath and started on the backstitching on it but didn't get too far on that before hitting bumpy roads in western New York state.

Later on I tried stitching on it and Blackstone Fantasy Garden but the roads in Ohio were no better than New York. 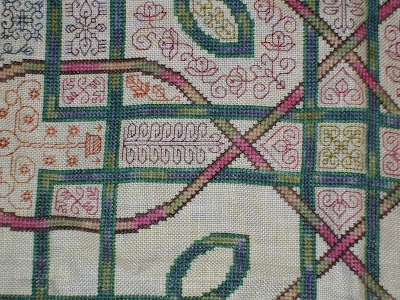 I did finally finish the piece next to the "heart" in the center of the picture one morning before we left either to get back on the road coming home or before we went to class, don't remember which. 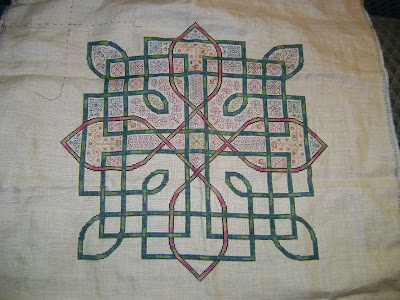 Here is what the full piece looks like so far... looks like I'm about 1/2 way through the blackwork. 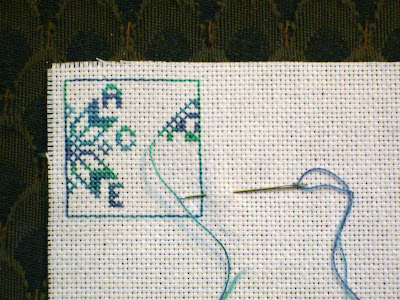 I also started another alpha block. I'm trying to get two more of them done before June 10th for my son's teachers. He loved the first one I did and asked for me to do some for his teachers in their favorite colors. Again though it was a challenge trying to work on this on the road. I'm doing them on 22ct white aida and I'm planning on making them into keychains for the teachers.

I've also gotten a couple of pieces done... awhile ago I finished "Footprints". This morning I put in the final french knot on rosebud wreath. I took these pictures just before washing them. They are now drying. I'll then press them and frame them and hope to have them to my son's school tomorrow for the auction they are having next week. 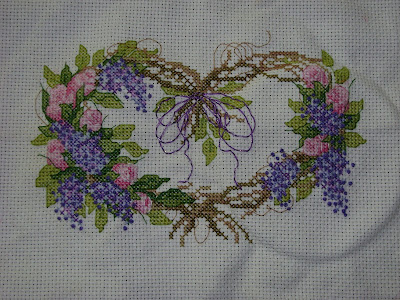 I plan on taking pictures of them when they are framed and I'll let you know how much they sell for next week. The auction committee has gotten one of the "big" local radio talk show hosts to be the auctioneer. 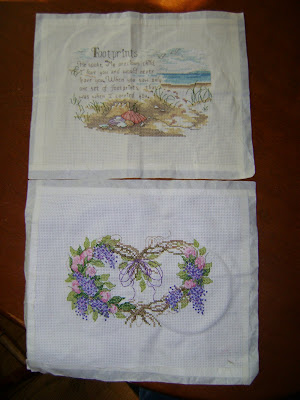