I decided there is no way I'm giving my Blackstone away for the auction at my son's school (even though I've had at least two parents suggest I do so). I did decide to do a cross stitch project or two though.

Yesterday I went out very early in the day (as soon as the store opened) and went through the racks at Joann's ETC to see what they had which would be nice but also a quick stitch. I already had in mind that I'd like to do the Donna Dewberry "Rosebud Wreath". I've done this in the past and I'm kicking myself because I couldn't find the pattern in my "STUFF".

When I was at Joann's I did find a kit by Jiffy. It is Footprints, thought this would be a very appropriate design for a Catholic school.

I'm including a photo of the front of the kit (it isn't the best). 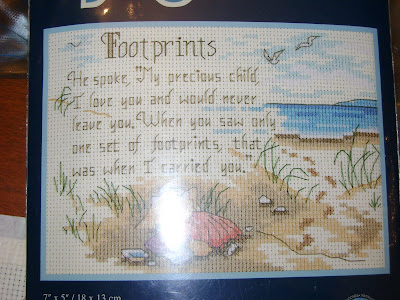 Here is my progress for yesterday. 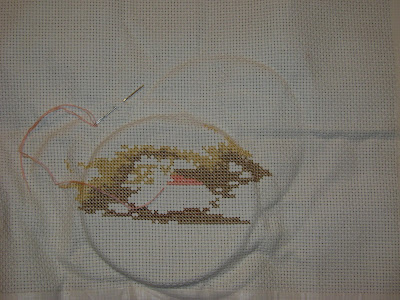 I prepared the material, threads, etc while the photocopier was running at my daughter's school (I volunteer doing copying for the teachers of her grade so they don't have to spend that time away from the kids). Then while I was overseeing "rest time" at my son's school, I started stitching. I then stitched while he was at gymnastics and then after dinner. I'm amazed at how quickly this is coming together.

Hopefully, this will continue to be a quick stitch and the old brain will start firing on all the right cylinders and remember where that other pattern is. If it all works out maybe I'll have two pieces for the auction at the end of May.
Posted by Jackie in CT at 6:23 AM 5 comments: